Achieving One Million Hits on My Second Life Blog!


Only those who attempt the absurd can achieve the impossible.
Albert Einstein

Be forewarned – This story is a brag!

Why shouldn’t it be?  After all, it’s my blog!  (Significant Other’s eyes rolls while asking why should this be any different from any of my other brags, er, stories.)

Well, I’ll tell you!  (Significant Other threatens to leave the room if I don’t get to the point.)

My blog went over the one million hits mark at about midnight SLT on Sunday, April 24, 2016!  (Significant Other wouldn’t let me stay up to see it happen and insisted that I go to bed.  No, Significant Other isn’t my mother.)

In just over five years of blogging about Second Life (SL), I’ve managed to hit this goal.  Yes, some have done it quicker, but most don’t get anywhere near this mark at all! 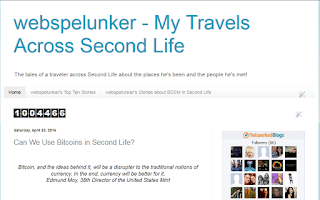 You mean besides writing over three hundred blog posts?

First, my blog of choice here is Google’s Blogger.  While I’ve since moved onto WordPress in Real Life (RL), Blogger is a very safe way to start blogging, is free, and is plugged into the Google family of products.

I did have some false starts along the way.

CNN iReports unceremoniously dumped their SL community onto the street not long after I’d started there and I had to scramble to find a replacement.  That’s where Blogger came in.  (I’ll bet CNN iReports wishes they had this traffic going to their site!)

I initially posted inworld distributing links to my weekly stories via notecards until I discovered social media.

I started using Facebook to reach out to other SL residents until I got dumped by them in one of their purges. (No hard feelings, my offer to interview Mark Zuckerberg still stands!  And, even in the world of Facebook, a million hits is a big number which I bet they’d rather have than their competitors.)

Eventually, I started using Twitter and that’s when my traffic started to really pick up.  Adding Google+ helped.  Using Hootsuite, a social media account manager, allowed me to automate.  Twitter’s recent change in their timeline algorithm has set me back some but I’m working on some new ideas.  Keep an eye out for new social media channels and content!

It hasn’t been easy!  (Not to complain!)

I’ve posted weekly with only one exception over the last five years.  (Significant Other has been great about letting me build this posting routine into our lives.)  Thinking up new story ideas and researching them is harder than writing the stories.

But, I feel good about my progress!  (Significant Other says, “Enough already!”)

There have been many other SL bogs that posted a few stories and then went dark.  (Sadly, some of these had excellent content.) Some post only once a year.  Others post regularly but get no traffic because they don’t do any promotion.

A few observations about SL blogging after one million hits.

First, this is only anecdotal, but SL social media activity seems to have been declining as if late.  I’m unsure if this has to do with less posting by writers or social media’s move away from organic growth to paid ads.

Next, many SL bloggers seem to be either posting less or stopping altogether.  I’m not sure why.  Could interest in SL be fading?

Finally, the next big thing in SL is sorely needed to revive interest in blogging and social media about this very important virtual world.

Now, I’d like to thank all who of you who made my achievement possible!

I’m sure it was more than my three loyal readers doing this!  (You know who you are and not to worry!  I won’t out you!)

And, no, I didn’t hit this goal by reading my own posts!  (Sheesh, not even Significant Other accused me of that!)

I’d like to thank L’il Sis and her posse at First UCC for being the first to congratulate me in public for hitting this goal!

Then, to all those inworld who let me tell their stories to you, my readers!

I’m in your debt and will always cherish our time together!

Can We Use Bitcoins in Second Life?


Bitcoin, and the ideas behind it, will be a disrupter to the traditional notions of currency. In the end, currency will be better for it.
Edmund Moy, 38th Director of the United States Mint

“Where are the bitcoins?”

I asked this question in my last story about bitcoins in Second Life (SL) and I still haven’t found any.  (Significant Other thinks that it’s very vain of me to quote myself.  My 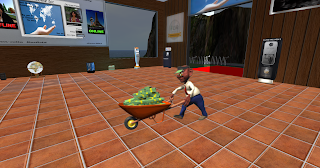 retort is who else writes about this stuff but me?) 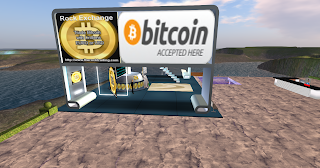 SL, I don’t have any hopes of anything going on.

I’ve done a fair bit of reading about Bitcoin since my last story.  (Anyone who’d like a great reading list just drop me a note!) What I’ve come away with is the question, “Can we use bitcoins in SL?”

Before I answer that question, let me restate the problem first.

The only alternative currently for economic transactions inworld is Linden Dollars (L$).  Linden Lab (LL) has a monopoly.  Also, because of fairly stringent U.S. Treasury regulations on virtual currencies used in games and financial exchanges, LL has incentive to run a tight ship.  (Anecdotally, I’ve heard that while Federal penitentiaries are nominally better than state pens, one is best advised to avoid incarceration therein.  Again, my knowledge is strictly anecdotal.)

If someone tried to use another form of exchange there have been issues with these.

Real Life (RL) cash or commodities like gold are impractical.  How would exchanges or delivery be made?  How would foreign exchange fluctuations be factored in?  How would one legally work around LL and US Treasury regulations without spending a fortune on paperwork?

Credit cards while addressing some of the functional and regulatory issues noted above have another set of problems.  Anonymity and security for starters.  Would you give your credit card number blindly inworld to an anonymous resident?  (If you would then please look me up.  I have a virtual bridge that I’d like to show you!)  Then there’s the cost.  RL financial institutions charge a fee for each transaction charged to a card payable by the merchant.  Which raises another slight problem.  How many RL banks or credit card issuers 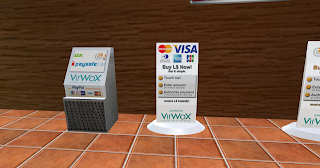 would issue a merchant account (Necessary to conduct credit card transactions.) to an anonymous business inworld.  (My guess is that their first phone call after a request like that would be to either the FBI or the Secret Service.)

OK, so those are all the traditional RL ways to possibly engage in financial activity inworld.  All non-starters.

Which brings me back to my original question, “Can we use bitcoins in SL?”

The answer could very well be, “Why not?”

Once one has obtained a bitcoin wallet in RL, one can use bitcoins.  Modifying kiosks or other payment devices in SL to accept bitcoins is a relatively straightforward exercise.  (Says a non-programmer.) Multi-signature bitcoin transactions and escrow services could be used to guarantee that all parties complete the transaction before payment is made.

Yes, some complexity and if escrow services are used then there would be some cost involved.  But, compared to what would be involved with any of the former payment methods that I’ve described, a relatively simple and inexpensive exercise.

Bitcoin can be a digital currency used across the Metaverse.

Bitcoin is secure and anonymous while eliminating the “play money” step with all the costs and inefficiencies that virtual currencies bring to the table.  Bitcoin would be faced with introducing its technology to virtual worlds, gaining adoption by a significant number of parties, and conversion of existing pricing to a one denominated in bitcoins.

A few disclaimers.  There’s always a few!  (Significant Other’s worried that I’ll be responsible for the next Great Recession.)

I’m not an attorney.  I don’t work with foreign exchanges in RL.  I’m advancing a few ideas here that are probably going to be the focus of some debate around the LL Terms of Service (ToS) and US Treasury regulations.  (Not to mention all the other governments in the world.)  Income earned inworld would still be subject to taxation.  I haven’t a clue how this would all work!

But, it’s a great discussion to have, isn’t it?

I would love to hear from anyone who has any knowledge in this area!

I’d really love to hear from anyone who has actually done anything with these ideas in SL or any other virtual world!  I’m sure my loyal readers (All three of them would like to hear as well!  OK, maybe just two of them, the other really enjoys my stories about nudist resorts inworld.)

One final thought, I’m not one of those who subscribe to the conspiracy theory that Bitcoin is a scam put together by the CIA and NSA.

Posted by webspelunker at 5:00 PM 5 comments: